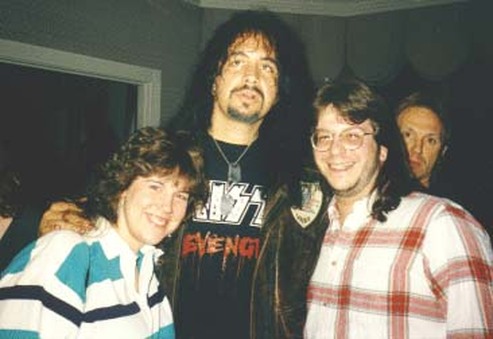 My dear friend Diana (with a short-lived perm), Gene Simmons (you know - the guy with the TONGUE!), and yours truly (the scruffy one) - NY 1992
Gene Simmons actually was this sweet guy who was incredibly taken off guard when Diana hit him between the eyes with questions about ... HIS PRE-KISS TEACHING CAREER!

Yep, that's right. Good ole Di quickly became Mr. Simmons' best bud when she brought up something other than the same old music stuff that he had probably been hearing at the last 10,000,000 parties that he'd been to. Go Di!

Robyn Hitchcock: A Silly Man?  I Think Not!

Erich Stollberger (a great musician), Mr. Hitchcock (another GREAT musician - and poet), Moi (merely a lyricist), and my childhood friend Robert Holm (ALSO a great musician) - NY 1992
Robyn was very congenial. I informed him at this point that I'd be interested in catching a quick interview with him for my radio show. Andy Metcalfe of the Egyptians had told me a few minutes earlier to tell Robyn that there was wine for the band downstairs, so I seized this opportunity to let him know of this pleasant fact. We made our way downstairs, away from the maddening crowd, to chat for a few minutes about the new album,, the band, and ... you guessed it ... record company parties. The man was no dummy. He realized their importance, but he also realized that the folks who attended these things were not really there to listen to the artist on the stage. They had other agendas. But as far as Robyn was concerned, that was cool. No hard feelings.

He went on to tell me that he was psyched to know that even one person ... "someone like yourself, perhaps?" ... was really listening to what he was saying. I thanked him for all of the great music. He smiled, and promised that he'd try hard to make more of the same "... if that's what you think of as great ... ". "But perhaps it will be different", he continued, " ... and you'll think that's alright too." We both laughed. "So Robyn", I said, " ... what happened to the girl with the umbrella?"

The response was not captured on tape, but if I remember correctly, it went something like this:

"Well, she was actually using the umbrella as some kind of gateway. Not really vanishing, but perhaps simply finding a place where someone was going to listen to her scream."

"Maybe the next show?", I asked

Laughter came along with the response. "Maybe, Tony ... maybe".

The woman was nice as could be, as was Melissa. You could see, though, that she was fairly clueless as to who Melissa actually was. Keep in mind that this was pre-Yes I Am , the album that would pretty much make her a household word. She told Melissa, "Wow, I'm really looking forward to the show. It was so nice to meet you." Melissa smiled and politely said "Yeah, well ... nice to meet you, too. Enjoy the show".

"Well, there are some old fans like me back here, if that's any consolation", I said"

A smirk crossed the face of the extremely talented Ms.Etheridge. "Uh, huh ...", she said, "... OLD fan, are ya?" She was definitely being playful now. "So, what constitutes and OLD fan?"

I took the two of us back a few years to a show Melissa put on shortly after the release of the first album. "How about the Nassau Community College Gym, right after the first album? You blew me away."

Melissa laughed and let out a whistle "Yipes, OK you win ... for this area, you ARE an old fan". She smiled and shook my hand, then very sincerely patted my shoulder and said "Well ... thanks for coming back, y'know".

"My pleasure, Melissa", I said. "Thanks for ... doing what you do. If you kep putting your heart in your music and your shows the way you do I'll keep coming back, believe me."

Melissa is still amazing in concert, but I have to admit that her last few albums have sort of lost their appeal for me in recent years. In any case, though, the lady has certainly proven her staying power!