A Bit About Me

It all started with an unwitting conspiracy between my folks and a clever young man who was dating my sister. She is eleven years my senior, so at 16 she had to put up with an annoying, precocious, six year-old who was in the middle of everything ... including the couch when she and her suitors were trying to cuddle. When my parents bought me a record player for X-mas one year, along with the assortment of kiddie records, one of these cunning fellows came up with a plan.

My folks ... Andy and Betty ... circa 1997
He came over to visit one night when my sister had been assigned "babysitting" duties armed with five of his sister's (he was no fool) brand new record albums. "Here kid ...", he said, " ... why don't you check these out". I looked at the covers ... an odd assortment of images and faces.

Yowch. I'll never forget the first time the needle touched down on Meet The Beatles. I started at side two. What did I know. I was a kid, right. Anyway, the opening rhythms of George Harrison's "Don't Bother Me" knocked my socks off. I was mesmorized. I don't think that I breathed through that entire album side. Good thing those Capitol albums were only 26 minutes long, eh!

Sgt. Pepper was another story. The crowd noise that started it off sucked me right in. All of those folks wanted to know what was going to happen during that album side, and so did I. I remained for the whole show. Admittedly, those strange whining, droning noises during "Within You, Without You" did wig me out slightly ... but I hung in there. I knew that there was something ominous and strange about "A Day In The Life". Perhaps it was the beginning of understanding. Perhaps it was the start of a loss of innocence. But it wasn't a baptism by fire. The Beatles still wanted to hold that girl's hand on the other record ... so I could still find a safe haven.

Anyway, the Cream and Zeppelin albums were a little scary. Interesting, but kind of confusing. Not quite yet on those. It would take a few more years, but I'd get there eventually. But Creedence ... ahh Creedence. John Fogerty's voice was so darn ... real. Right there. With his doot doot doo's and his songs about making music on the corner, he was painting pictures in my head that really came alive.

I had been listening to, and humming along with, the radio since I was a wee munchkin, but now it was getting serious. The folks caught on that the little guy was spending lots of time in front of that three inch speaker. Since it wasn't exactly the type of neghborhood where my parents were able to say "Hey son, why not go and play outside", they encouraged my interest. Dad brought home some cut-outs from the local five and dime. Enter into my life everything from from The Lovin' Spoonful to Beverly Bremers (remember THAT one hit wonder ... "Don't Say You Don't Remember"!). These were some very hungry young ears. Finally, one day in 1970, I asked that fateful question: "Hey Pop ... can I go to the store with you and buy a record with my allowance money?" It was the Fifth Dimension's version of "Aquarius". I bought it all by myself. It's amazing, but I still have it. And so ... that was the end of my ever retaining any of my allowance money for anything longer than the amount of time it took to get to my local music retailer. Years later I could simply exchange the word "allowance" for "salary". 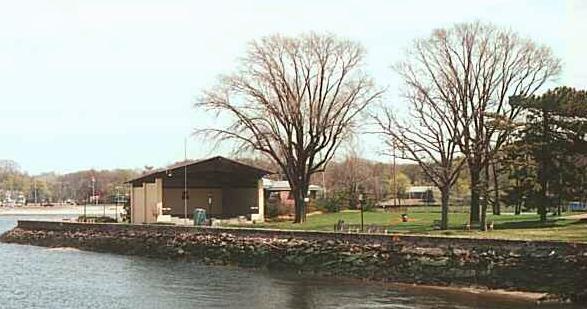 A view of the once quiet little hamlet known as Port Washington, NY
When the family moved East from the Bronx to The Island, I found that many of the local kids ... usually those a bit older than myself ... were also grooving to the latest 45's. Music, coupled with my bizarre sense of humor, showed my new neighbors that I was ... well ... pretty OK. They could always count on me to provide them with a front porch where we could endlessly flip over the latest Top 40 singles.

One day at school, I did the unmentionable. A classmate had brought in her singles collection to play during a rained-out school recess. It would be a mid-afternoon dance party. To begin with, I was appalled by the way she threw those things around. No respect. But I digress. Anyway, I had the nerve to take her copy of "Crocodile Rock" by Elton John and ... saints preserve us ... flip it over to play the B-side. Before I was suitably chided by my entire class I got to hear half of this wonderful thumper called "Elderberry Wine". Now I usually gave the flip sides a chance; after all, most Beatle records were practically double-sided hits. This was different, though. Who was this Elton John guy anyway? I was ready to find out.

The following week found me sick and in bed for a few days. Mom, being a loving and sympathetic Mom-type person, asked if I wanted anything. The usual response was along the lines of the newest Superman or Batman epic, or a recent single. I had done my research, though, and I went for broke. "McCrory's has a sale, Momma". Mom paused. "Uh-huh", she muttered with some what's this gonna cost me? type trepidation in her voice. "Can you get me the last Elton John album. It's called Don't Shoot Me, I'm Only The Piano Player ". Now she was puzzled. "What?" So I repeated the title ... and, with a shrug, off Mom went - on a mission for her ailing little offspring. Now, I knew what I was doing, mind you. ALL of the Elton John albums were on sale, but the newest one was a double album ... and I wasn't pushin' my luck. Besides, it didn't have "Elderberry Wine" on it. Twenty-four years later, the album remains one of my favorites.

To all of the kids at school, Elton John was the current 'pin-up' singles artist of the day. These young ears, however, were now being filled with songs like "Have Mercy On The Criminal" and "High Flying Bird". I didn't understand it all, but I knew that these words were telling stories. And yes ... I was gonna "be a teenage idol" when I grew up. I followed a number of other artists' careers over the years, but I would stay close to the work of Elton John and Bernie Taupin. It didn't take long for me to save up for that new double album myself.

The following year, my family moved again. It was only a matter of a few miles, but what I would find in my new surroundings was going to really set things off. Here was found Beatles' bootlegs and a neighbor with (up until that point) the biggest record collection that I'd ever seen. Wow. I was gonna love it here. The family next door had five children, and they would all be integral parts of my life for the next seven, all-important, years. I remain extremely close to Lorraine and George, two of those "kids" to this day. I also still delight in seeing the rest of the clan whenever I can.

Jumping waaaaaay ahead, I cut to the present day. I've remained a big fan of Elton John and Bernie Taupin. I was ecstatic when Bernie joined up with Alice Cooper ... who had become another one of my favorites ... to produce From The Inside. A brilliant album, in my humble opinion. I played tracks from Taupin's second solo album He Who Rides The Tiger many years later on my radio show. I began singing lead in a cover band (Shindig!) in 1993, and that adventure brought me face-to-face with my current collaborator, John Keating. I think that he and I have waited a long time to bump into one another. I just can't shake the feeling that if a great number of people are ever meant to hear my lyrics being sung, they will be heard with John Keating's music being played under them. We're only a few dozen songs into things ... but they're comin' along.

At some point during those years between high school and now, I've had the good fortune to meet a few of the people who have inspired me throughout my life - many of whom still continue to do so. The events of one unusual evening in 1988 found me face-to-face (OK, you hardcore fans, no Billy Joel jokes here) with the inimitable Elton John, and with his longtime partner ... the person who really helped to thrust me into my lifelong affair with a pen and paper ... Mr. Bernie Taupin.

- And the story of that meeting appears elsewhere on this site.

- My thoughts, feelings and "reviews" on Bernie Taupin's adventure with The Farmdogs ... an all-too-short-lived side project, appears on the site as well.